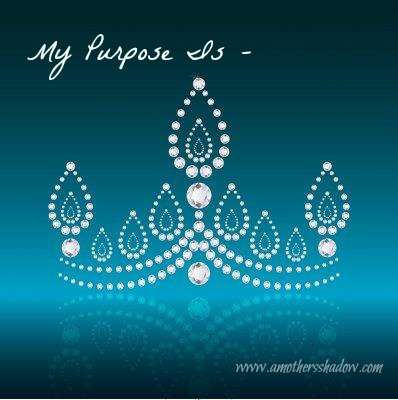 What Is MY Purpose?

Home » What Is MY Purpose?

Do you ever wonder if you can make a difference? Does your life really matter in the grand scheme of things? What is your unique purpose? When we feel discouraged or question our reason for being in the place we are, at the time in history we are; let’s remember the story of Esther and see the analogy in our own life.


Our story begins around 480 BC, we find Esther adopted by her Uncle Mordecai after her parents had died. We know that Mordecai was a good man,  devout, courageous and practical. Being raised by Mordecai, now due to a series of events Esther found herself chosen as the next queen of the land. After sometime Mordecai over heard a plot to kill all the Jews. Mordecai managed to get word to Esther, who she, herself was also a Jew, telling her she must approach the king and tell him of the conspiracy. There was a problem. In the culture of the day, if Esther were to approach the King, without him summoning for her first, he could with the slightest inflection, order her death for overstepping her bounds. For obvious reasons Esther was extremely hesitant and terrified to go to the king without his beckon; which she pointed out to Mordecai. Mordecai explained again, that all their people would be exterminated saying, “who knoweth whether thou art come to the kingdom for such a time as this?” (King James Version Esther 4:14).

Esther was extremely beautiful and was chosen to be the queen probably in large due to her looks, her intelligence and disposition. Mordecai felt she was most likely in that place at that time to save a nation if she would have the courage to do what she needed to do. She could save herself and hide, but God would know. She replied, “If I perish, I perish.” What valor, what a worthy shadow! Esther did approach the King and saved her people, the Jews, from certain death in one of the most exciting stories of the bible. Why do I bring up this story of Esther?  I have these quotes with a picture of my children in a frame that has hung on my wall for the past twenty-two years: We fancy God can mange His world only with great battalions when all the time He is doing it with beautiful babies.  F.M. Bareham When a wrong wants righting, or a truth wants preaching, or a continent wants discovering, God sends a baby into the world.  Spencer W. Kimball So, what about YOU?

As we each look at our special unique gifts and talents, we can ask God:  What IS MY Purpose?  I know the answer will change as we triumph and overcome obstacles and difficulties in our life. Our vision will expand of the good we are doing and the capacity for positively influencing others, even for the generations to come that will call you blessed for being as Esther; doing what is needed, despite the possible danger and the bravery it will take. As we LEARN how to closer to God PRACTICE listening to Him, sometimes falling short, but we keep on trying We will BECOME a bit better every single day.

‘A Mother’s Shadow’ a novel by Carrie Groneman

Are YOU A Super Hero?

Did You Survive Yourself OK?