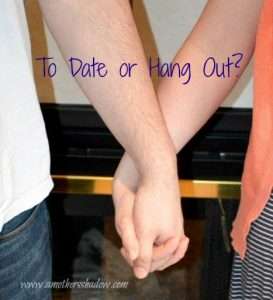 To Date or Hang Out

In my novel, A Mother’s Shadow, Emily and Harry ‘court’ as it was called back in the day; dating as it is referred to most commonly now. I am surprised at how things have changed in the dating world in just the last few decades. It always has been important, and I believe it still is. However, there seems to be a transformation from dating with a purpose, to just passing time and hanging out endlessly with no purpose, no direction, just  – – – hanging out.

Let’s start with a bit of the history of dating:
In times long gone by, marriages were arranged for political or monetary benefit or to gain property. Some marriages were even by capture and not by choice.
We have many of our chivalry dating rituals handed down to us from  Medieval times, such as a man opening doors for a woman and pulling out her chair. It was also the time that romance began to take precedence over arrangements for the benefit of a family, person or rulers. The man would sing songs and recite poetry to the woman he wanted to court. The virtues of chastity and honor were held in the highest regard.
The Victorian Era (1837-1901) now put the primary focus of love and romance in a relationship. Courting became almost an art form; very formal and rigid. If a man was interested in talking to a  lady, it was not proper for him to simply walk up and speak to her. Even after a proper introduction it was quite some time before it was considered appropriate for the man and woman to be seen in public speaking to each other. Couples were almost always escorted by a chaperone and a marriage proposal was hand written.
It is interesting as we look at the history of courting or dating. Before 1900, courtship was between a man and a woman and it was with the deliberate purpose of getting to know each other and assessing the other as a potential husband or wife. They were usually from the same area, and known by someone close to them so they could be assessed before the relationship was too far along. The man would go to the woman’s home to court her, and then under the watchful eye of her mother and brothers.


A considerable change came with World War WWII and the way society viewed ‘proper’ courting, values and family involvement in the marital agreement. Introductions were no longer needed. A man and woman were now able to go to a movie, for a ride, to dinner, anywhere without any escort or the safeguard of the family and close-knit neighbors. For better or worse, it brought change.
Now we have another significanttransformation in the dating arena. Instead of dating or even courting, it is more common for groups of young men and young women, in their twenties and even thirties, or older, to ‘hang out’ as a group……all the time……just a mass of people all tagging along together…..and do this weekend after weekend, month after month, even year after year.

Hanging out DOES have a purpose:

Caution:  Do not get stuck in the rut of of ‘friend zone’ of always hanging out and never actually dating to see how much you really do like that person.
Now for dating, let’s first look at the definition –

Dating [1], a form of courtship, which may include any social activity undertaken by, typically, two persons with the aim of assessing each others suitability as a partner (http://en.wikipedia.org/wiki/Date)

So why is it so important to pair off to date*:


Question:  Dating does cost money, time and you may go out with some…..do I dare say duds? So why got through it all? Is it worth the effort and work?
Answer:  Geez, even a high school diploma takes years of showing up, doing things that were not always fun and keeping at it. Why wouldn’t finding a right one be somewhat difficult too?
The young man –

Dating generally begins in high school to socialize, and can go into the early 20’s and beyond. It’s also a way to get to know yourself and what you are about, and what you like and dislike; this is perfect and normal.

As you later (when the marrying age and prepared) date seriously to see the qualities in the other person that are important, and which will appear naturally over time, take it slow and get to know each other dating in different situations, you might want to ask yourself the following:

*Tips:
*Hanging out at a friends house, a youth group, a school activity or impromptu gathering can be an awesome way to meet new friends and have a chance to date outside the same circle of people.
*Dating, though awkward and even challenging, can help you understand yourself more as you meet others, get to know them and their personalities.
*Waiting to date until at least sixteen is recommended because of all the physical, emotional and psychological changes that are naturally occurring, it is difficult to also add in the mix of the attraction of one-on-one with the opposite sex and handle it with sound wisdom, high morals and not have regrets later on.
*Group dating is another highly suggested consideration while you are in high school and even after; depending on your situation. It offers safety and is easier as there are other people to talk to in the group, and it usually is more fun too.
*Leave the fear behind, find out where people are hanging out and meet new friends.
*Take the challenge to ask someone on a date/accept a date that isn’t the ‘perfect’ ideal of what you think you are looking for. You never know…
*HAVE FUN! ENJOY LIFE!  This is a remarkable time to dive right in and just swim in the BEST of the GOOD that life has to offer – that is what youth is all about.
Copyright Carrie Groneman, A Mother’s Shadow, 2015
Recognize a blessing and be a blessing today
For More Posts On This Topic:
‘A Mother’s Shadow’ [2] a novel by Carrie Groneman (available on Amazon), click HERE [3]
Are We On A Date? [4]
Dating Conversation Starters & WOW Ideas [4]
Happily Ever After [5]
What Kind Of Friends Do You Have [6]
Dress To Impress [7]