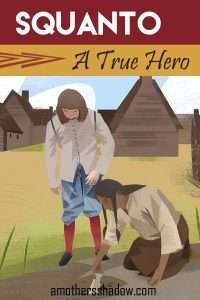 A true story of how turning hard experiences into positive ways to help others. Trusting God and His ways in our life.

Thanksgiving and Squanto, A True Hero

Do you know the story of Thanksgiving and Squanto, A True Hero?
The story of the pilgrims is familiar, remarkable and exemplary; however, the story of Squanto completely intrigues me.
Granted as you investigate, you will find many variations of the story, but here I have done my best to bring you the most common and universal one that has been researched best possibly since it happened so long ago.
It a story of miracles, forgiveness, love, surviving with  dignity and seeing God’s hand in ways never imagined.
You will never think of Thanksgiving the same after reading this amazing life of Squanto.
To easily teach your family his story I have a Family Time Lesson all about Squanto HERE [1]

Squanto, or his Indian name, Tisquantum, was a Patuxet, which was a band of the Wampanoag tribe.
Traders were known to the Indians as they came from far away Europe, including, of course, England. One day in 1614, a Captain Hunter directed his ship along the coast of what we now call Massachusetts to trade with the Indians. Squanto and some friends went to see the Captain, as he had traded with them before. Rather than trade with the boys, Captain Hunter and his men hit the young men over the head. The boys were immediately transformed into his captives.
Can you imagine the terror these Indian boys felt as they regained consciousness in a dark, stuffy, rolling vessel? The food was putrid; rats were scampering about; the water was rancid; not to mention the sheer brutal treatment as a young Indian captive. After what would have been several months, the ship stopped in a land the youth had never imagined even existed: Malaga, Spain.
The Indians were herded off the ship and into the sunlight. The light stung their eyes and drove an intense pain right to their brain after spending several months in the dark hull of the ship. Horror, dread, and shock were likely but a few of the emotions these boys felt as they were lined up to be sold as slaves.

Here is an account of Squanto’s kidnapping:
When Friars, or Monks as they are also referred to in many historical accounts, in Malaga discovered that Squanto and others had been kidnapped and were being sold as slaves, they immediately took custody of as many of them as they could.

The Monks took them to the Catherdral where they were taught the Christian faith, the Spainish language and the culture of Spain.

Many did not believe in slavery or what was happening all over the world  and did not agree at all; knowing it was inhumane, cruel and evil .  In fact, Sir Ferdinando Gorges states, the Friars (Monks) were “so disappointed this unworthy fellow of the hopes of gain he conceived to make by this new and devilish project.”

Although living with the Monks was unfortunate, in the circumstances that took him there in the first place, he must have realized  how different his life could have been, had someone else purchased him that day at the auction.

Naturally he missed his home, his family, his people, and his land.  The Monks, understanding this, managed to arrange for Squanto to travel to England from Spain, in hopes of finding a ship. It must be noted that the odds of Squanto actually traveling back to the American continent were stacked high against him.

It is unfortunate that we do not have the history of how Squanto traveled from Spain to England. Did he have a map? Did he travel with a caravan?
The speech he had learned as a baby was now replaced with the Spanish dialect of the monks.

As he traveled, he likely did not understand English, which would be a major detriment once he entered the country.

Squanto somehow came to reside as a stable boy for a family in London, England,whose name was Slaney. He prayed fervently every single day to someday return home to his family, to hug and kiss his parents, his siblings, his friends. The longing for this reuniting must have been agonizing.

Finally, a trading ship was scheduled to sail to the coast of North America. It was around 1618, and another five years had passed while he was in England and learning the English culture and language. Because of his linguistic capabilities, he became the translator on the ship in trade of passage.

Another Popular Account of the kidnapping:
After landing in Spain, Squanto was taken by a ship captain to London, then to Newfoundland, then back to England after a few years to be an interpreter.   While working as as an interpreter he was on a ship that sailed back to New England and to his homeland.

Back to our story:
Any travel by ship back then would have been rigorous and long.
It was now 1619 when the ship landed and, by providence, it stopped on the coast of Massachusetts. He must have bolted off the vessel and ran as swiftly as he could to the home of his boyhood. I’m sure tears of joy were streaming down his face as he made his way to the village.
Horrified, he saw the place was abandoned. There was no one there, not even a dog to bark and announce his arrival.

Traveling on, he found Indians in a neighboring tribe who told him the devastating news that a disease had struck and everyone had died. There was not a soul left of his family or his friends.

The heartbreak and sadness, even depression hung around him, weighing  like the smoke of the continual camp fire.

He had yearned for this moment: to see his beloved people for over ten years, and now it was never to be. Squanto went to the woods to live by himself, in self-designated seclusion.

He was no longer an Indian with the ways of the tribes.

He was not an Englishman or a stable boy.

He was not an interpreter to merchants, sailors or those who needed his language skills.

His family and tribe were gone.

He found himself as a lone man without family or country; truly a stranger in a strange land, if there ever was one.

Meanwhile, in 1620, a little band of Pilgrims suffered great persecution from their own countrymen and government.  They decided to sacrifice all for the opportunity to worship God freely, and in their own way.

Crossing the great Atlantic in a relatively small boat for a long ocean voyage, the Pilgrims put complete trust in God and His purpose for them.

Landing at Plymouth, they anticipated and dreamed of a life of freedom to worship as Christians, along and with enough prosperity to raise their families.

The first year for the Pilgrims was nightmarish.

Disaster struck the settlement, and fifty percent of the people died.

No one could have blamed them had any questioned God’s purpose in all that had happened.

Their disastrous situation was catastrophic, leaving the Pilgrims barely able to see any light or prospects in the situation; only more death and starvation.

An Indian from a neighboring tribe tried to communicate with the Pilgrims, to help them; but to no avail.

He traveled to find Squanto, knowing he had lived with the white man and could communicate with these people who were obviously suffering.

Squanto sympathized with the news of the strangers, ignored his own pain and sorrowful circumstance and walked to the village.  As he approached he spoke to them in English.

Can you imagine the shock of the Pilgrims?

An Indian brave speaking the King’s English in 1621!

Ironically, the Pilgrims had settled and made their homes on the very spot that Squanto’s parents, friends and family had lived.

The village that had been abandoned, providing the Pilgrims a much needed place of shelter.

Squanto not only taught them, but was such a good and trusted friend, that he was adopted by this group of people as ‘one of them’! A place, friends, FAMILY!

Squanto knew this land well as he had worked alongside his parents; now he could teach the Pilgrims how to plant corn with fish as a fertilizer, how to embed a gourd around the cornstalk to help it grow and other ways to live on the land.

Not only that, but he taught them to fish, to get eels out of the muddy streams, and to find lobsters.

Because Squanto  had been in the places he had, learned the language to communicate, had the vast resource of knowledge to communicate AND chose to look to God for His will and purpose in his life, Squanto was prepared and able to be a savior to this very special group.

Why is that important?
Because this little band of struggling Pilgrims would be a seed, the beginning and foundation for the United States of America!

Squanto opened relations and trade with various Indian tribes and the settlers which was critical for survival.

In fact, Plymouth Governor William Bradford was moved to declare him a “spetiall (special) instrument sent of God for [their] good”.

We all have struggles, trials and circumstances that are so foreign and even incomprehensible at times that we naturally question why we must endure these incredible hardships.

We may even wonder if God is there, knows us, and has a plan that is for our good?

I know that if we pray, stay close to Him and remember that He loves each one individually, because we are His son or daughter, then we can begin to realize that His love is unfathomable and enduring.

Our Father in Heaven has not sent us here to fail, but to overcome the things of the world that do not matter, to be triumphant in overcoming our own weaknesses, to be steadfast in persevering through difficulties and to endure well to the end by never losing faith in Him, His son Jesus Christ, or our ability to love as He loves us.

We may not have the spectacular events of Squanto, but be assured, and do not doubt that God has a plan for you!

His tender, caring and kind eye is always on you.

His love is continually there to surround you.

His ways are not always going to mirror ours, but they are perfect.

His hand is outstretched continually, never failing to lead you along on correct paths.

As we celebrate this Thanksgiving season, let us count our blessings one by one.

It is amazing what the Lord is doing to help us be more like Him. Let us have courage and determination to be victorious while on our journey here in this life, despite challenges that may be placed in our way. For this I pray, for each and every one. Happy Thanksgiving.

Copyright Carrie Groneman, A Mother’s Shadow, 2019 (edited by Dallin Groneman  and Stan Groneman, thank you both!)
Recognize a blessing and Be a Blessing today