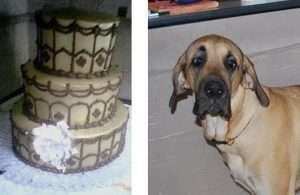 THANKFUL FOR PETS
While growing up my sisters and I raised ‘bummer lambs’ (the orphaned or abandoned lambs), I had a horse, my sister had chickens and we had 3 dogs.
When the lambs were a bit older and strong I would let them out of their pen and as I rode my horse through the streets of the small town, the lambs would follow. If they started to stray, I would call and they would come back in line. Great times!

Currently I have a cat, which I have a business relationship with. She catches mice, she can stay.
Pretty much all of our married life we have had a cat. A funny incident happened when all 5 kids were young, probably 12 and under, our cat had kittens. One day, the momma cat meowed at the door, I opened it and she came in with a live mouse in her mouth! My kids had friends over, so there were about a dozen kids who screamed when they saw the mouse wriggling to get away, the cat dropped it with all the commotion. Finally I managed to get the kids to stand still, allowing the cat could catch the mouse, which she was taking to her kittens to teach them to ‘mouse’. AAHHH!!
Pets are very dear to their owners and a great source of comfort and companionship. There are funny experiences that come with pet ownership.
My son Devin and daughter-in-law Ashley have a German Shepherd that laughs when tickled!
In fact,  Ashley and her family LLLOOOVVVEEEE their dogs and I believe have always had a few at a time. They have quite a few humorous stories, and were kind enough to share a couple with us.


Ashley’s family purchased a Great Dane puppy (remember here folks that puppies gggrrooww) for her brother, and repeatedly told the boy in very plain language, do not, under any circumstances let the puppy, named Charlie, sleep with him in bed.
The son ignored the warning, and Charlie grew to be 165 pounds, becoming too large to share the little twin sized bed with the 11 year old boy. The parents had to purchase a queen-sized bed, with hopes it would give the boy some space in his own bed…..it was fruitless. Charlie loved the extra space and would completely spread out, leaving the boy crammed in the corner and practically unable to move in the night.
For my son Devin and Ashley’s wedding, they first planned on making all five large dogs part of the reception…..until that is…Charlie struck again.
Remember Charlie was large, so much so that he stood at eye level with the kitchen counter.

The wedding cake was on the counter until time to be transported to the location of the reception. Charlie leaned in, took a bit out of the cake. ALL dogs were immediately uninvited to the reception.
Ashley has worked as a veterinarian technician and occasionally has a run in with an unruly dog. One day she helped the veterinarian with a very large dog that needed medical attention. This particular dog did not like his feet touched but needed his nails trimmed as part of the procedure.


Ashley, being about 7 months pregnant, had to position her body on top of the dog, practically lying spread eagle to keep the large dog somewhat under control. As the veterinarian worked, the dog became more determined to get away and kicked his back leg, which unfortunately caught the waist band on Ashley’s scrubs. As the dog retracted his leg, the pants with it a bit! She couldn’t let go of the dog  for the safety of the dog as the veterinarian worked; so Ashley did her best to keep the dog still while wiggling to get her pants back up.My son Devin and daughter-in-law Ashley had two very large dogs, Darko and Rowdy. When Rowdy heard the bath running he ran full bore into the tub, despite who is in there.

I called Ashley one day to see how she was doing and oh my!!!
Because Ash is very kind hearted, she was watching my sister’s dog as a trial run to see if she and Dev wanted to keep her, along with her dog-sitting 2 other of her sister’s 2 dogs, her dog Darko all in addition to a another dog she was babysitting until a good home could be found.
Well, her sister’s dog escaped, so Ashley called to her son, my grandson, and kinda dragging/holding the 3 year old boy, started running after the escapee, calling to the others dogs to follow.
Just imagine the noisy procession of a run-away dog, followed by a gal and her son calling ‘stop’ to the dog in front and ‘come, hurry’ to the 4 dogs following her. What a site!!
What are your pet stories?

If you are able, please contact your local animal shelter and donate a couple of needed items.
Copyright Carrie Groneman, A Mother’s Shadow
Recognize a blessing and be a blessing today.